Features at a glance

If you don't see the ImmortalsFenyxRising.exe process in the Process to inject to textbox, please click the Select button to select it manually. This might be the case if you're using the UPlay+ version. Additionally, if you're using the normal UPlay version but you're running the game as Administrator, and the IGCSClient.exe does not, it can't see the ImmortalsFenyxRising.exe process. In that case, restart the IGCSClient.exe as Administrator.

Additionally to the normal configuration features, this photomode mod also has an additional feature:

Resolution scale
The factor multiplied to the game's internal rendering resolution. This is the same setting as what's available in the game's menu. The output resolution will be the same, the game will render on a higher/lower resolution depending on what you choose for this setting. High values will cause the game to slow down considerably so use with caution.

The Environment Adjustments tab is the tab where you can adjust various aspects of the game world and also make Fenyx invulnerable so you can try to take action shots without dying a lot. It has the following layout: 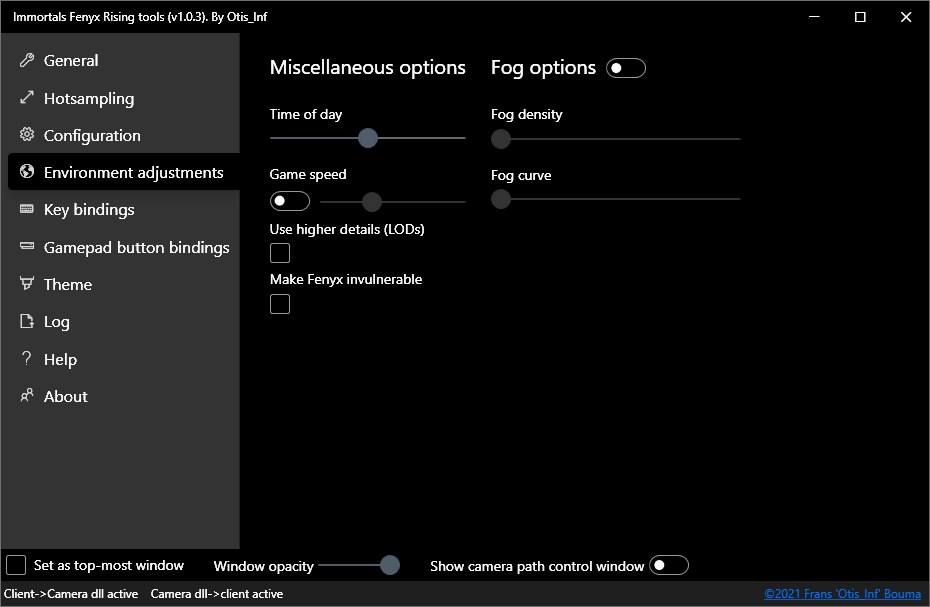 Time of day
Time of day controls the current world time in a 24 hour clock. When the game is paused and you move the time of day, you will see the sun move and the light change, but it won't take effect for 100% until you unpause the game. This is an aspect of the game engine. You can also change the time of day with the keyboard (see Keybindings) which might be easier than flipping back/forth to the client to get the right sun position.
Game speed
This controls how fast the runs internally; a value of 1.0 is 'normal game speed' and a value of 0.0 is total pause. Use this to create slow-motion effects which help you pause the game at the right moment.
User higher details (LODs)
This is an important setting to get higher details in the game world. It affects foliage, mountains, shadows, rocks and models like NPCs and Fenyx in the game world. It does have an affect on performance as well.
Make Fenyx invulnerable
This setting makes it impossible to take damage. It's ideal to setup great action shots as you don't have to worry you die during the process.

If you leave the Fog override setting on, it might be the menu glitches. So turn it off when you go into the menu.

When you create a Camera path, each node records the camera location, orientation and field of view. Additionally to that for this game the camera node will also contain the current fog values, time of day and gamespeed. So if you want to have different time of day values per node or game speed you can, just set the value you want in the client on the Environment Adjustments tab and create a camera path node.