All photomode mods are based on a common system, which is always used in the same way. The general use of the photomode mods is therefore the same for every game. The following explanations refer globally to these basic possibilities. Differences per game will be taken up and completed in the individual descriptions of the respective game / mod.

The general use of all photomode mods is explained here using the mod for Assassin's Creed Valhalla. However, these global explanations also apply to all other photomode mods.

How to use the photomode mods

It's important to keep the IGCSClient.exe window open! Don't close it for the duration of the game session.

To get started with the photomode mod, you typically do the following: start the game normally and wait till it's in the menu. Then you start the IGCSClient.exe and click on the Inject DLL button as shown in the screenshot below, highlighted with a red line: 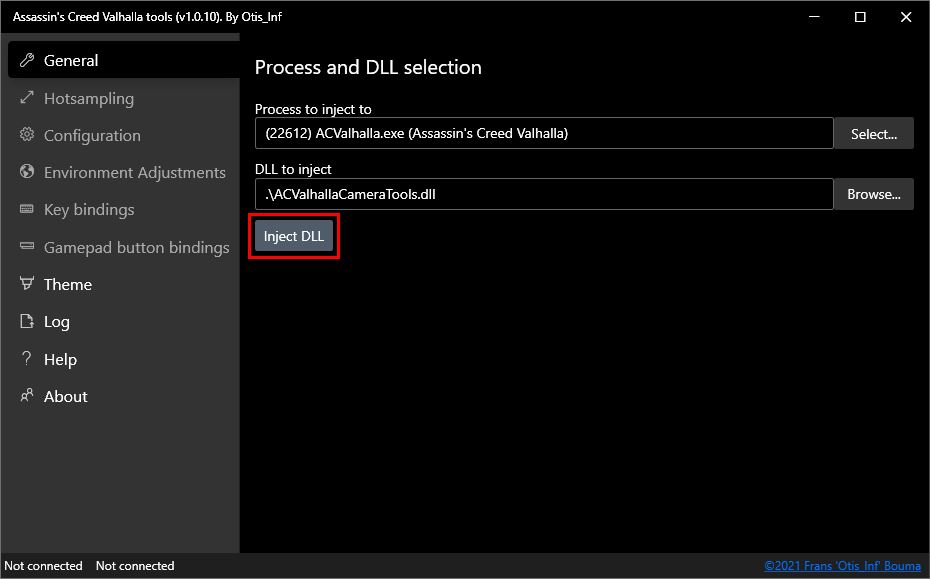 The general tab before injection

After you've clicked Inject DLL, the client will inject the photomode mod dll into the game's process and will integrate with it. It should look like the following screenshot, and all tabs in the client should now be available: 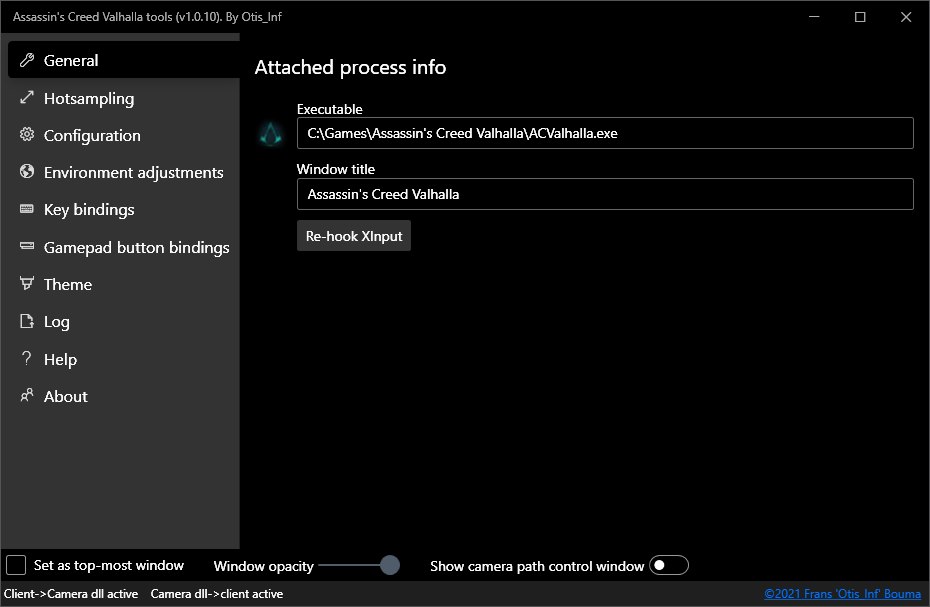 The General tab after injection

Once the photomode mod has found the camera in the game it'll fully initialize the features. You'll get a notification in the left top corner of your monitor when that happens. After the camera has been found, you can use the features, like pause the game, hide the hud and enable the camera. Please see the Controls section below for further details how to activate the various features.

At the bottom of the screen you see three controls: "Set as top-most window", "Window opacity" and "Show camera path control window". These are explained below.

It's highly recommended to run the game as 'Windowed' or 'Borderless'. This way the photomode mod can dynamically resize the game window to the resolution you want. See the Hotsampling section below for details.

The Resolution Scale option in the screenshot is specific for the Assassin's Creed Valhalla photomode and therefore explained in the guide for that photomode mod.

The photomode mod is highly configurable. To do just that, click the Configuration tab in the IGCSClient, which looks like the following: 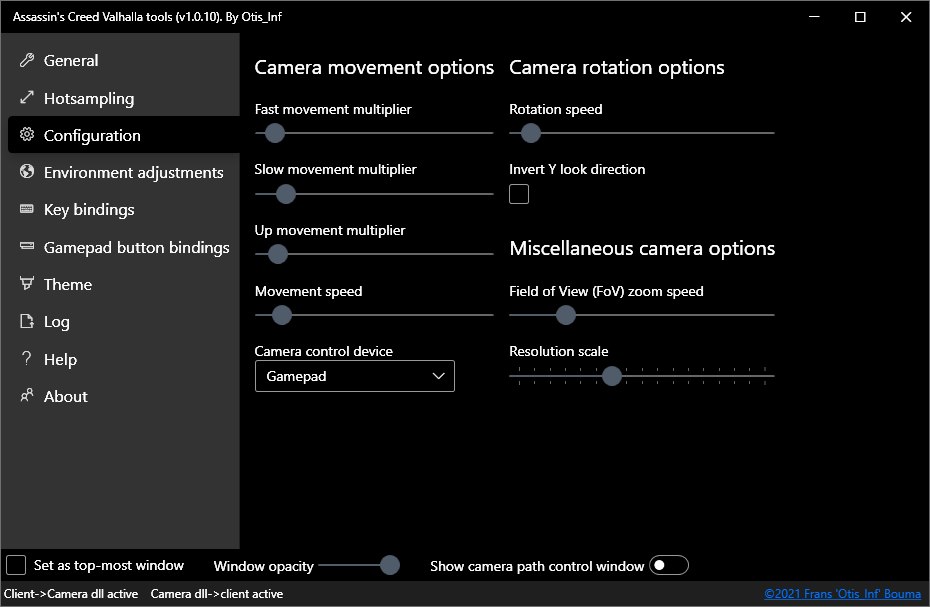 The sliders on the tabs in the client can be moved using smaller steps than what sliding with the mouse might accomplish. To do this, select the slider and use the left / right cursor keys to move the slider left/right.

All settings on the Configuration tab are persisted to the IGCSClientSettings.ini file in the folder where the IGCSClient.exe is located so you don't need to configure it the next time you start the client.

The first group of options are the Camera movement options. The photomode mod has several speeds for moving the camera: fast, normal, slow and up.

The photomode mod will slow down movement speed with a factor relative to the current Field of View (FoV) value so when you zoom in (lower FoV), moving / rotating the camera will feel faster, so the movement / rotation speed are lowered.

Rotation speed
The rotation speed is the speed used to rotate the camera. Changing devices (mouse vs. gamepad/controller) might require you to alter this setting.
Invert Y look direction
This setting controls whether you want to have the camera rotate downwards when you press the rotate forward button/key or upwards. By default the camera will rotate upwards. If you prefer to rotate downwards instead, check this checkbox.

Field of View (FoV) zoom speed
The speed with which the camera will zoom in/out.

By default the IGCSClient.exe has a key bound for almost every action. You can alter them on the Key bindings tab by clicking in the textbox of the action and then pressing the key combination you wish to use, as is shown below in the screenshot with the textbox highlighted with the red line. After that, click OK to keep the new key combination or Cancel to revert to the old one. 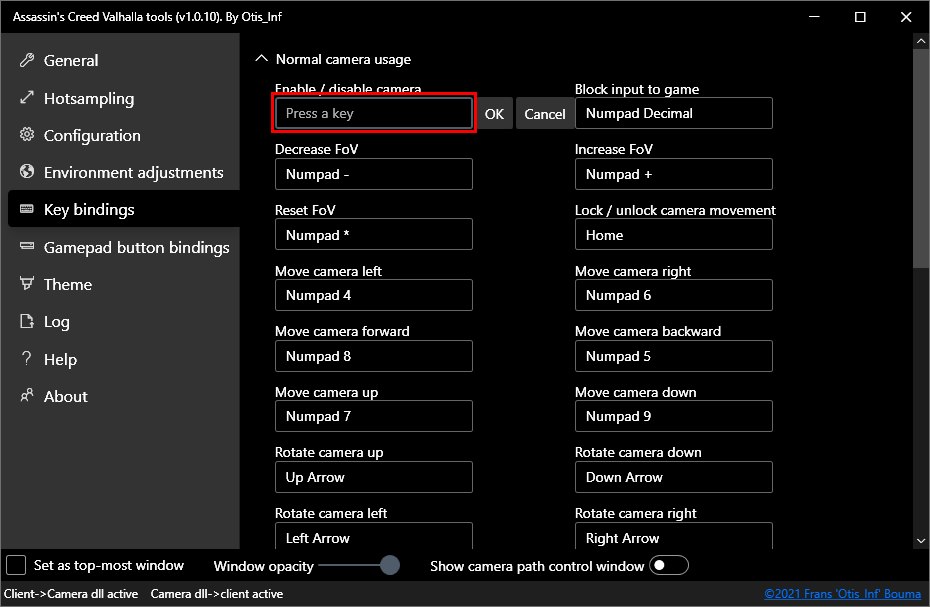 The Key bindings tab when configuring a new key binding

You can bind multiple actions to the same key combination, e.g. you can configure a single key to pause the game, enable the camera and hide the hud. All keybindings you change are persisted to a file so if you want to change a keybinding, you only have to make the change once. 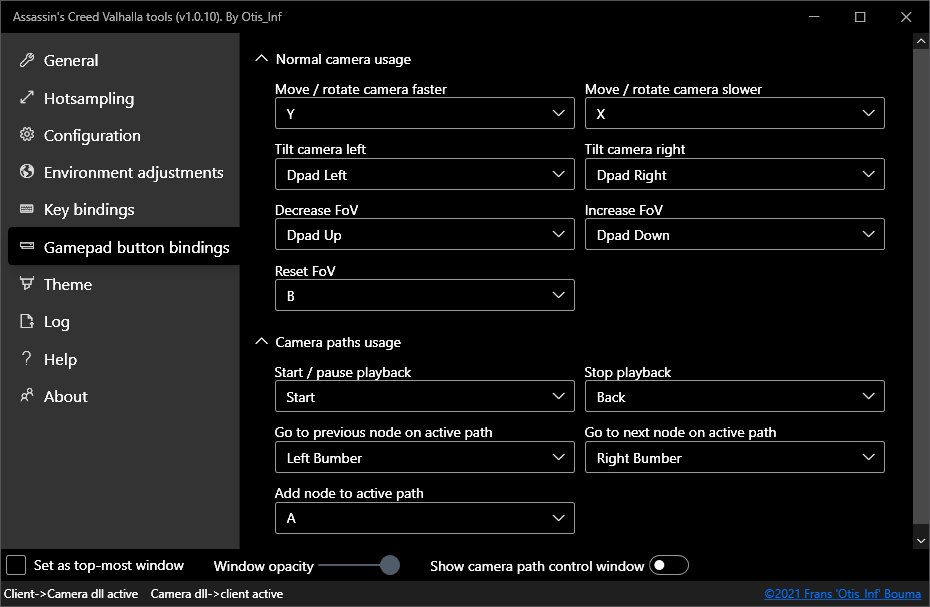 To select a different gamepad button for a given action, simply select it from the combo box of that action. All bindings are persisted to the IGCSClientSettings.ini file in the folder where the IGCSClient.exe is located.

Note For people using an XBox controller, 'Start' is the button with the 3 stripes, and 'Back' is the Menu button.

'Hotsampling' is a term for dynamically changing the resolution of the game. This is very handy as you can play the game in your normal monitor's resolution, set up your shot and when you want to take the shot, resize the game to a much higher resolution. To do that, click the Hotsampling tab to use the Hotsampling feature of the photomode mod. The controls for hotsampling look like the screenshot below: 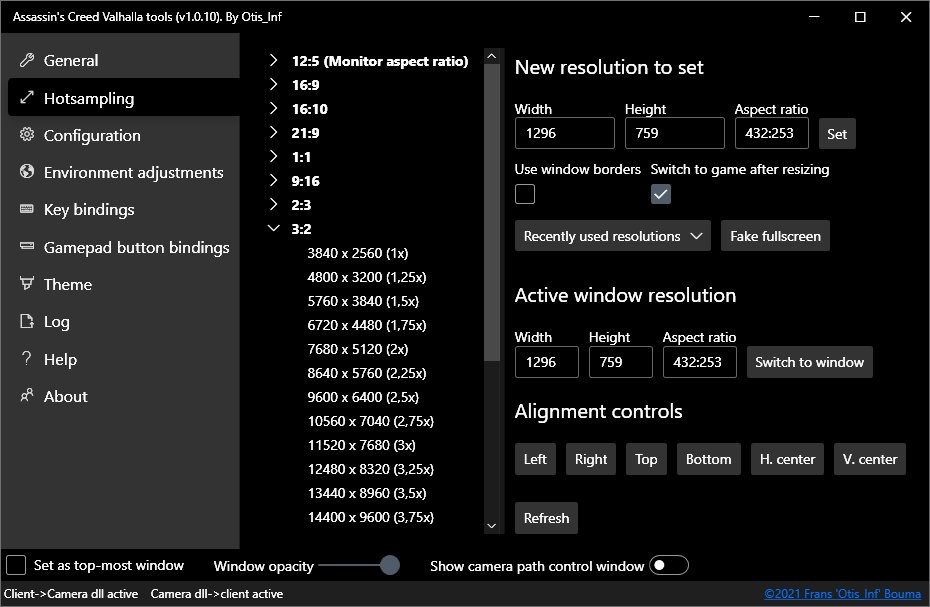 The client has already pre-generated a lot of resolutions for a variety of aspect ratios for you. To resize to a different resolution, simply select it in the tree on the left. This will fill in the Width and Height of the New resolution to set in the top right. To resize the window you then click on Set. The game window will now resize to the game window and resolution and aspect ratio you've selected. If the window does resize but the game resolution does not, you likely run the game as full screen. Please run the game as 'Windowed', the photomode mod will offer you to get rid of the Window border.

To quickly switch between resolutions you've already chosen before, click the Recently used resolutions button. This button will enlist the last 10 used resolutions and will immediately resize the window to that resolution so you don't need to click Set.

If you want to resize to a resolution that's not in the tree, simply specify it under New resolution to set by filling in the Width and Height textboxes, and click Set.

Hotsampling resizes the game's resolution to the value you've specified. This might mean the resolution you've chosen is too high for your hardware and the game will run very slow or even crash. So it's recommended to first take small steps before cranking up the resolution to a high value as you might lose that unique shot that took so long to setup.

If you resized the window to a resolution much bigger than your monitor, you can't check if everything rendered alright. To do that click one of the buttons in Alignment controls, to move that part of window to the monitor area. So clicking Left will make the left side of the window visible on your monitor, and so on.

The Log tab is the tab which gives you more information about what the system is doing, and whether there are errors. It also allows you to disable notifications for e.g. camera enabled/disabled. 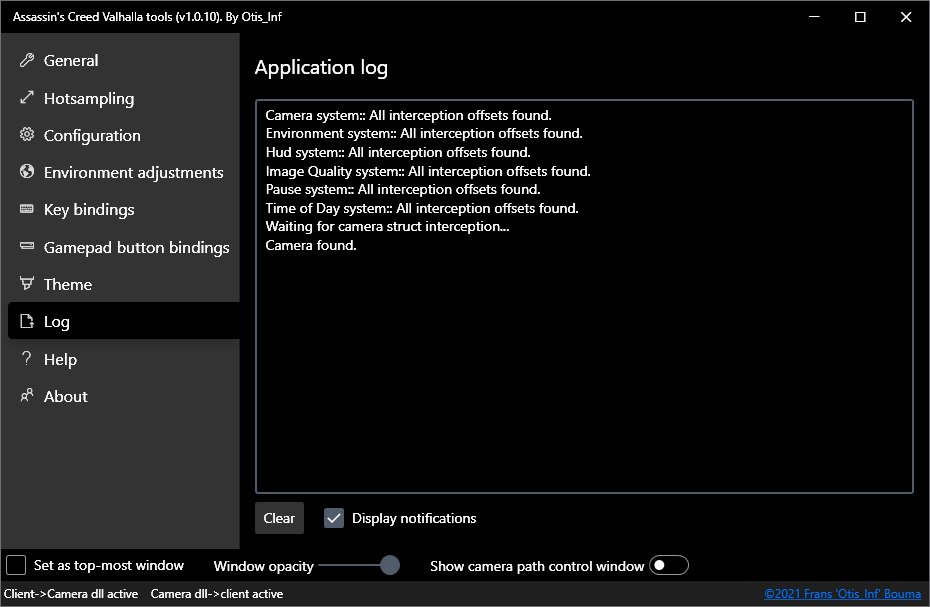 If the game is updated and the photomode mod might be out of date, the Log tab will tell you.

The Help tab gives you more information about controls and how to use the client. It can be very useful when you don't have this guide handy but want to know more about e.g. the controls.

All the sliders are reset to their default value if you double click them.