Features at a glance

If you don't see the ACValhalla.exe process in the Process to inject to textbox, please click the Select button to select it manually. This might be the case if you're using the UPlay+ version. Additionally, if you're using the normal UPlay version but you're running the game as Administrator, and the IGCSClient.exe does not, it can't see the ACValhalla.exe process. In that case, restart the IGCSClient.exe as Administrator.

Resolution scale
The factor multiplied to the game's internal rendering resolution. This is the same setting as what's available in the game's menu. The output resolution will be the same, the game will render on a higher/lower resolution depending on what you choose for this setting. High values will cause the game to slow down considerably so use with caution.

The camera smoothing options are for when you want to record a video by flying through the game world and control the camera manually, so not through a camera path. Normally the input to the camera system will be used instantly and you see an effect immediately. However for videos it's often desired to have a smoother camera movement than what's needed when you position the camera for a shot.

The camera smoothing options will give you the ability to control how much of the input you're giving to the camera system is used in future frames so it's creating a smoother experience; e.g. if you set the movement interpolation factor slider to 100 (default is 1), the input given to move the camera forward is used over 100 frames and is slowly flowing away to 0 after you stop giving input to move forward.

Try to combine the values for the smoothing factors with lower/higher values for movement and rotation speed to find the ideal setup for your recording. It's likely you want a higher interpolation factor for movement than for rotation and FoV.

The values are stored in the ini file for next time you start the client.

The Environment Adjustments tab is the tab where you can adjust various aspects of the game world and also make Eivor invulnerable so you can try to take action shots without dying a lot. It has the following layout: 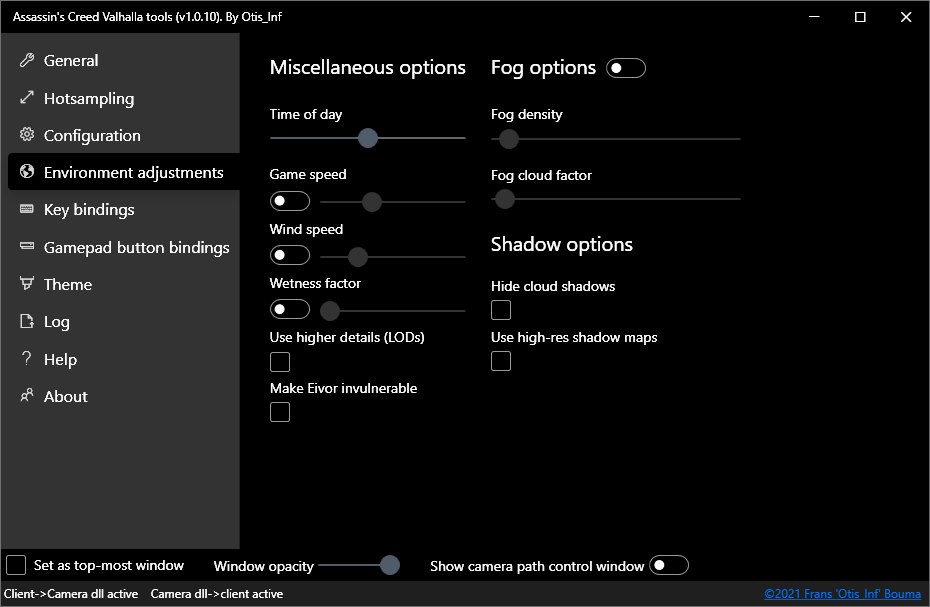 Time of day
Time of day controls the current world time in a 24 hour clock. When the game is paused and you move the time of day, you will see the sun move and the light change, but it won't take effect for 100% until you unpause the game. This is an aspect of the game engine. You can also change the time of day with the keyboard (see Keybindings) which might be easier than flipping back/forth to the client to get the right sun position.
Game speed
This controls how fast the runs internally; a value of 1.0 is 'normal game speed' and a value of 0.0 is total pause. Use this to create slow-motion effects which help you pause the game at the right moment.
Wind speed
This setting controls the wind speed close to Eivor, and affects the trees/foliage as well as fog clouds close by.
Wetness factor
This setting makes wet surfaces shine more, the higher the value you specify. By default wet surfaces don't look very 'wet', just a drab dark color but don't reflect any light. This setting allows you to crank up that effect. It's a global parameter and affects all wet surfaces equally.
Use higher details (LODs)
This is an important setting to get higher details in the game world. It affects foliage, mountains, shadows, rocks and models like NPCs and Eivor in the game world. It does have an affect on performance as well but not that much.

Due to an issue in the game engine, it might be when having this setting enabled, you'll see buggy triangles rendered on screen and the game might even crash. This occurs mainly when you open the map or when you are at a high position in the world (e.g. at a synchronization location) and you look at a rather big city in the distance. This is sadly unavoidable, so keep this in mind when enabling the setting: it might crash the game.

Make Eivor invulnerable
This setting makes it impossible to take damage. It's ideal to setup great action shots as you don't have to worry you die during the process.

When you create a Camera path, each node records the camera location, orientation and field of view. Additionally to that for this game the camera node will also contain the current fog values and time of day. So if you want to have different time of day values per node, you can, just set the value you want in the client on the Environment Adjustments tab and create a camera path node.